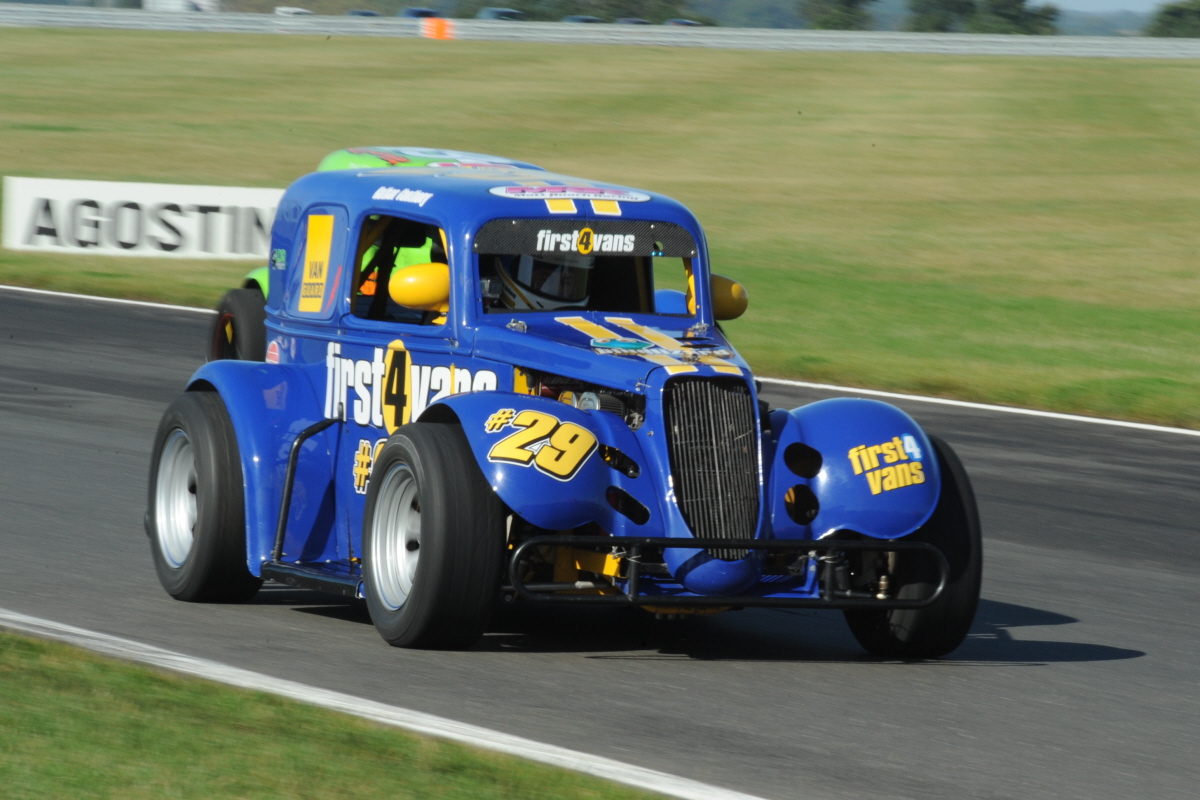 We have to start with some bad news… Almost as soon as it began, the MRF Legends Cars National Championships is drawing to a close.

Our Se-Van (the only van in the legends series!) took part in the two days of racing over the weekend of the 30th September/1st October, with Nathan Anthony once again behind the wheel.

The now-famous #29 van was part of a wet and wild race at rainy Rockingham Super Speedway – try saying that five times fast!

Before the 7th race of this 8-race series had started, the battle for the championship title was now a two-horse race between John Mickel (Horsham) and Ben Power (Guilsfield, Powys).

But the interest for First4Vans was around the middle of the table, where Nathan had been doing good work putting pressure on 6th placed rookie Miles Rudman (Sutton Coldfield), and was only 90 points behind at the start of racing.

The rain was back again, having blighted the last outing at Snetterton, and made life hard for our hero on the track.

Whilst Mickel and Power traded blows in the two heats, Saturday was not in our boy’s favour, as Nathan finished outside the top in both heats.

During the final race of the day, it was disappointment again for Nathan and Team First4Vans as we reached a best place of 9th in the wet – having had to make changes to the set up.

After the chaos of last month’s race interruption at Snetterton, Sunday’s racing was fairly straightforward, as the weather dried up for Heat Two.

Sean Smith (High Wycombe) won for the second time in his career in Heat One, while Steve Whitelegg completed a lights-to-flag victory in Heat Two, before capping the day off with another win in Sunday’s Final.

Nathan, meanwhile, was left to rue falling into 7th place in the Championship as the second Whitelegg brother Gary finished fifth in the Final to push above us in the standings.

On to next time…

Our next race is at Brands Hatch Indy Circuit in Kent for the FINAL event of the MRF Legends Cars National Championship season on the 4th/5th November.

Hopefully Team First4Vans can finish the season off with a bang on Bonfire Night!

Until then, keep updated with Team First4Vans and our Legends Car Racing series by following us on Social Media and regularly checking this section of the website!

Need Something else? Our services include:

Van sales – we sell vans to use commercially.
Fleet Sales – Along with selling individual vans we can also sell entire fleets to commercial traders.
Long & Short term van hire – Need to hire a van? We do that too!
Daily hire – If you are in need of a larger vehicle to transport goods in a domestic capacity, we provide this.
Half Day Hire – We also provide spot hire on a half day basis.
Service, Repair and Maintenance – In addition to sales and hire we also maintain your vans.
MOT’s – We can take care of your MOT’s.
Fleet management – if you need someone to take charge of your fleet, we can provide this.
After Sales – we also provide after sales care.
Finance – If you need payment assistance we have a team in place ready to help.
Van accessories – We also provide a wide range of accessories to spruce up your van.

First4Vans is a van sales and hire dealership based in Horley and Crawley in the South East of England. They provide a range of services to both commercial and residential clients.